With Void Star, Zachary Mason delivers a cyberpunk thriller follow-up to his debut The Lost Books of the Odyssey that you can just as well file under literary fiction. The novel is an examination of the connectedness technology has brought us, and the relationship we humans have with that technology. Existential questions arise, and in Void Star, not only the characters ponder the human condition, but also artificial intelligence, that ultimate technology.

Yet Void Star is fast-paced and driven by a plot resting upon three protagonists. There is Irina Sunden, who works as a freelancer contractor, interfacing with AI using a brain implant which comes with the perks of perfect memory and wireless connectivity. Kern the street fighter makes a living in the favelas, having taught himself martial arts from a scrap laptop. Hired to steal a special phone, he uses it to connect with mysteriously jailed Akima. The quest she sets him on is meant to free her, but when they meet, her conditions in real life are quite different. Then there is Thales, whose survival depends on an implant similar to Irina’s. His father, a Brazilian politician, was killed in an attack, and Thales is struggling to make sense of the world ever since. Questions from his doctor and Akima don’t help.

Machines within machines, he thought, and, perhaps, machines within those, and so on forever, and for a moment he remembered that he was playing a game…

The paths of these characters span the globe, yet they intersect and their actions and the respective consequences are all connected. Thrown together (or assembled with great care) like the party of any good RPG game, they face various human adversaries, but as we learn that one of the three protagonists only exists in the virtual, it becomes clearer that someone beyond the plane of everyday human life is pulling the strings. 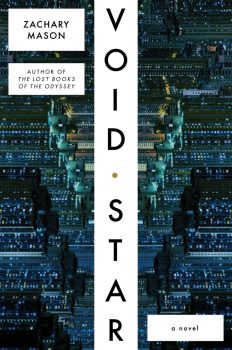 A small group of scattered humans and AI working on seemingly opposing sides – at times, Void Star is reminiscent of Neuromancer (image source).

In the world of Void Star, AI has evolved by designing future versions of itself, which leaves no common language with the humans, no interface; even Irina’s interactions are brief and fleeting like hallucinations with cryptic epiphanies. Humans also pose a puzzle for AI, which tries to interpret the character’s behavior through one another. Zachary Mason is a master of world building without putting the science fiction first – the descriptive details are there to set the scene and help you understand the extent of technology and how climate change has rearranged the planet’s population. There are self-driving vehicles, construction drones, security drones, private armies, hacking bots reminiscent of the intrusion countermeasure electronics in William Gibson’s Neuromancer trilogy, rejuvenation treatments and mercenaries with exoskeleton fighting suits.

The vividness of Void Star does not come from the technology Mason invents, but from the sensory detail the characters provide, from their observations of outdated tech such as the towering remnants of a space elevator, and the fact that the implants of Irina and Thales single them out not because they are cutting-edge, but because they’re already obsolete, decaying, unreliable.

Language thus plays a huge part in Void Star, because it is always through the word choices of the characters that we experience their world, and ultimately, their connection is based on them telling their story to each other. In their exchanges, Irina and her friend Philip resume one endless dialog whenever they meet.

Like similar stories before it, Void Star struggles with making us relate to the world of AI through language. The grand finale happens in the abstract, and in the virtual world; Mason uses the trick of creating scenes from the memory of Irina’s dead friend, a mountain climber, so the showdown happens high on a slope. The peak remains physically inaccessible to humans and literally in the cloud(s). What seemed possible and attainable high up cannot even be put into words after the descent.

Void Star satisfyingly ends in the real world, not the virtual one, where each character has a path before them; between them, there is a sketch of the way forward together for humans and AI.

Rating:
Four and a half stars blazing in the void.

I did NOT receive a copy of this book in exchange for a review.