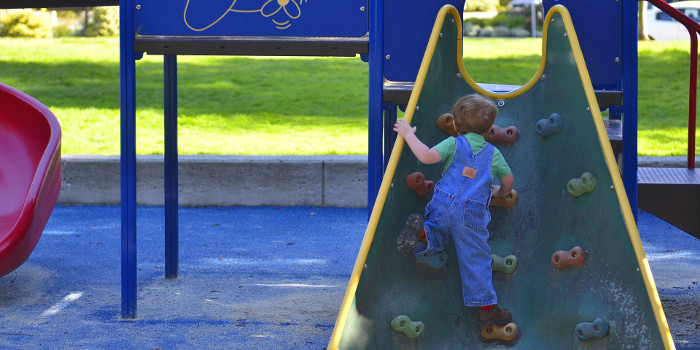 The following is an excerpt from a guide on how to start rock climbing I have written for Outside Pursuits. You can read the full version on their site.

Rock climbing as a sport is definitely experiencing a rise in popularity. It offers fun, exercise, a healthy dose of adventure and allows you to experience nature in new ways. Climbers are generally sociable and you will also get to meet new people. We’ve compiled the following guide to get you started on rock climbing as a beginner. We’ll introduce you to different types of climbing, the gear, technique, and lingo. After reading, you can figure out which type of climbing you want to try and what you need to begin.

Disclaimer: This guide is no substitute for a beginner’s course and instructions by a professional at a climbing gym. Safety is your foremost concern, so you need a reliable teacher to show you knots, technique and handling of equipment.

The Different Types of Climbing

For the most part, climbing is a sport that requires a partner. You can do bouldering or top rope climbing at a gym with an automated belay machine on your own, but to fully experience rope climbing, you need to team up. If you don’t have buddies who can introduce you to the sport, the best way to get started is an initiation course at a climbing gym. You’ll learn the essentials under supervision and get to meet people who are starting out just like you.

Don’t be intimidated: to newbies, it might seem climbing is about muscles, strength and showing off, but truth is, the greatest climbers are often the most humble or even shy people. Also, technique matters more than style or strength, and your stature and reach make you unique – every route or problem presents itself differently to each climber, so it’s not about competition and all about finding your personal way up! 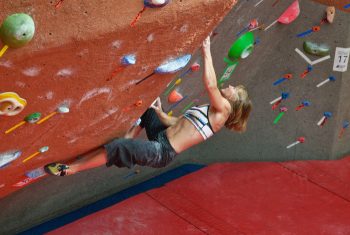 Bouldering at the gym… (source)

This is the most accessible form of climbing as it requires minimal gear and can be done solo, at least indoors. Bouldering is possible at climbing or bouldering gyms, as well as outdoors on real rocks, so-called boulders. All you need are shoes and a bit of chalk. Bouldering does not use a rope or a harness to protect the climber. Instead, routes – or “problems” as they are called – usually don’t exceed 20 feet in height. Anything beyond that is often called highball bouldering. It poses a much greater risk for injury and is for experienced climbers only. In a boulder gym, you will find mats on the floor to protect from falls. Outside, climbers use crash pads to absorb the shock of a fall. A partner can assist you in bouldering by constantly making sure the crash pad is aligned with your fall zone, keeping people from walking into your fall zone and by pointing out holds and moves. This is called spotting. Bouldering is both a physical and mental activity as you try to solve the puzzle that each problem poses. It has a low entry barrier as most gyms also put up problems for beginners where you can train and have your first success in climbing. It’s a great way to learn climbing technique, because you can focus on movements and holds without being distracted by the rope. Boulder problems are defined by holds for your hand and feet and need not be vertical: a sideways route is called a traverse. 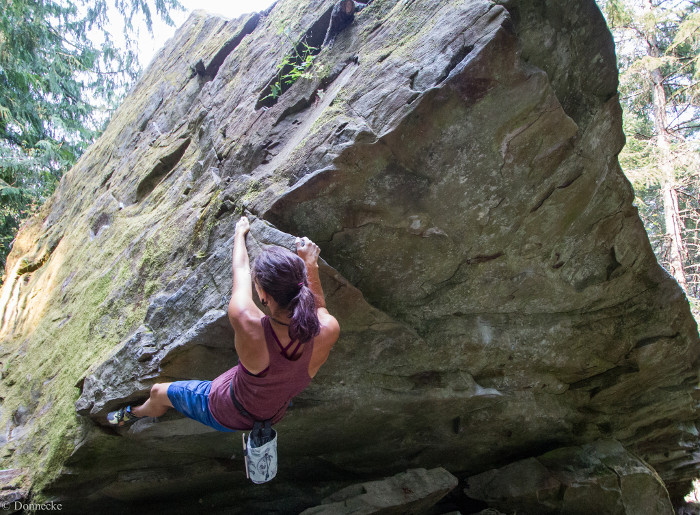 Top-roping means the rope is already set up in an anchor at the top of the route. The climber ascends towards that point while the partner is pulling in the slack of the rope, thus keeping the climber safe. With the anchor point above you and a taut rope, you’ll fall a minimal distance, if at all. You can easily rest by sitting in your harness when your partner, the belayer, has taken in all the slack. Top roping is possibly in climbing gyms, where routes have already been set up, and outdoors. On real rock, it requires a lead climber to do the first ascent and set up the top rope, although on some routes, it’s possible to hike to the top. An anchor can be bolted with two rings and a chain for redundancy, or be set up slings and carabiners on a sturdy enough tree or rock feature. Belaying a climber is a skill you will need to learn as you go along. Top rope climbing requires a rope and a harness for climber and belayer as well as a belay device through which the rope passes. Some gyms have auto-belay devices so you can top-rope without a partner.

Sport climbing means a lead climber is ascending a wall while bringing the rope with them from the ground up. Bolts placed along the route allow the climber to clip the rope using quick-draws (a short sling with a carabiner at each end) to protect any falls. At the top the climber builds an anchor or uses a permanent anchor already in place and is lowered by the belayer from the ground. Depending on the route and the set-up, it is then possible to do a second ascent as top-rope. Sport climbing is the most common form of outdoor climbing, however it requires someone has already bolted the route. Because the climber needs to be lowered or lower himself, the rope length needs to be at least twice as long as the route. Longer routes are called multi-pitches. Here, the lead climber ascend up to an anchor point, then belays the partner up to the anchor before continuing. It is also possible to practice lead climbing in many climbing gyms – a great way to build up experience for climbing outdoors.

Trad is short for traditional climbing. In this outdoor style, the lead climber places removable protection (such as nuts, cams and friends) along the route which will not remain after the climb is done. This form of climbing allows for the exploration of any route or rock wall, but it requires experience, especially in how to properly place and remove the gear. The advantage is that climbers are not limited to bolted routes and need not leave any trace on the wall. In some nature reserves, sport climbing can be impossible because bolts are prohibited, but trad climbing is allowed with some restriction.

Alpine climbing has the primary aim of reaching the summit of a mountain. Routes here are very often multi-pitches, requiring several length of climbing rope. It can be a mix of trad climbing, sport climbing, or aid climbing, where an aid such as a ladder, a cable or fixed rope, or pulling and stepping on gear is used. Alpine climbs require careful route planning and selection, and knowledge of anchor and protection techniques, as well as the skill of how to bail, i.e. to abandon a climb in case of adverse weather or even an accident or emergency. With more routes being bolted and constant equipment innovations, alpine climbing has become increasingly like sport climbing.

In ice climbing, climbers ascend ice formations such as frozen waterfalls and cliffs or slabs covered in ice. It can be part of an alpine attempt to summit a mountain, where an ice section is part of the route, or water ice, such as a frozen waterfall. Ice climbing uses special equipment such as ice picks and crampons to aid the climber and ice screws to place protection. 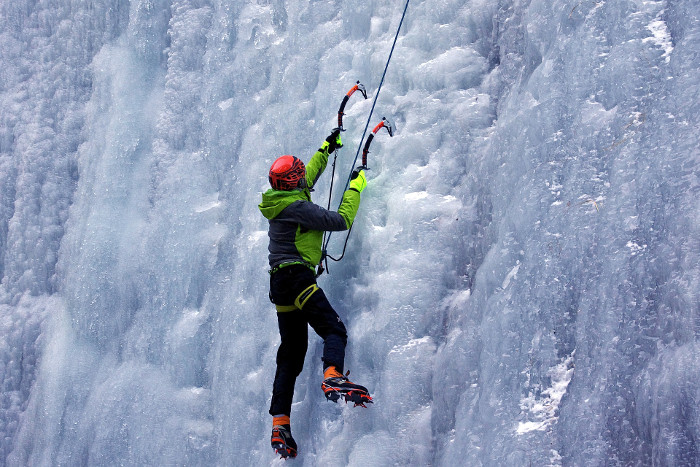 The opposite of aid climbing is free climbing, meaning the climber makes upward progress solely by relying on the natural features of the rock wall as holds. Gear is only used to protect a fall and for belay, not for pulling or standing on. However, the climber is protected by the rope, as opposed to during a free solo ascent. During a free solo, the climber is completely on their own, with no rope, no harness and no protection. How is this different from bouldering? A free solo climber reaches heights that would result in injury or death in the event of a fall. While some call it unethical or plain nuts, others call it the ultimate achievement. One of the most renowned free solo climbers is Alex Honnold.

The US primarily uses the Yosemite Decimal Rating System to rate the difficulty of routes. The scale runs from 5.0 through 5.15, with difficulty increasing with a higher rating. As a beginner, start with the easier routes in the range between 5.1 and 5.5. In a gym, an instructor can recommend routes for beginners. As you progress, you’ll eventually try harder routes between 5.6 and 5.10. Beyond that grade, routes can have a letter from a to d attached to them to further distinguish difficulty, i.e. a 5.10d is harder than a 5.10b.

Boulder problems can use the same scale or be graded on the V-scale from V0 (easiest) to V16 (hardest). The grade of a route or problem takes into account holds, spacing, shape, necessary moves, steepness and terrain, but it is not an expression of “danger.”

When you complete a boulder problem or a lead climb with no falls, you “send” it. Doing a route or boulder first try without falling and no prior information is called “onsight.” If you have received prior tips (called “beta”) or watched someone do it, you “flash” the route or problem. If you successfully do a free climb after several attempts, it’s called a “redpoint.” The term “project” is used for a route or problem you’re working on but haven’t managed to complete. A “repetition” denotes a successful follow-up. 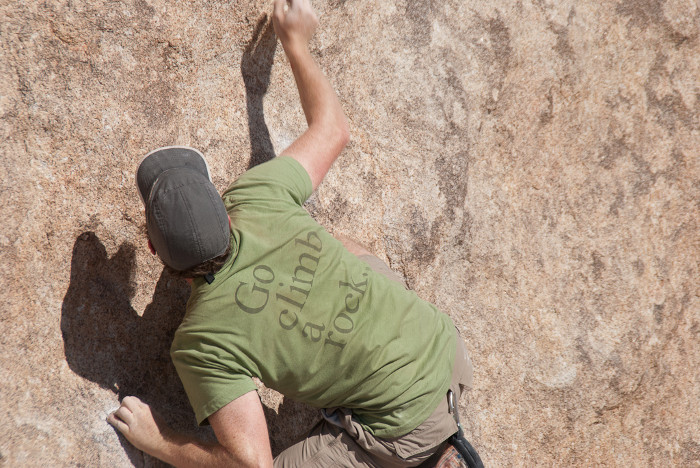 A climber on a boulder problem (source).

This is an excerpt from an article that first appeared on Outside Pursuits where you can read the full version.