A travel writing snippet I wrote in Callosa d’en Sarrià the Alicante region of Spain while on a road trip in 2011. A portrait of a cyber café clerk attending to her clientele.

A tall and lanky figure I at first take to be a blonde teenager devoid of any babyfat with gaps in her mouth as if she was just getting rid of her baby teeth when she must at least be nearing her thirties, each missing tooth marking a hard-won loss, rid by malnutrition and domestic violence, no dental plan, no health insurance in her job description.

She knows how to read and work people, no way in hell could she otherwise exercise as much command over the room filled with the smell of teenage sweat and daytime labor, and exercise control, take command she does, a pony-tailed starfleet officer sans uniform except the workingman’s, stone-washed frilly-fringed jeans and a once white hand-me-down or otherwise one size too large tanktop the norteamericanos cynically like to call a wife-beater, standing elevated on crate or palette behind the shoddy, botched carpenter job of a counter as if it was a flagship starcruiser’s bridge, allowing herself to use lulls in the the tide of business as late afternoon goes over into early evening to check the net herself, or take a few strident steps, sockless in worn tennis sneakers, to drag on her filter cigarette smouldering in an ashtray just outside, within easy reach of the entrance, so that her watch over the room continues even though it seems she’s taking a break.

The coffee automat says NO FUNCIONA, and so says a hand-written note taped to the door of the servicios, all squiggly felt tip capitals; the clientele has nothing to bide them over their wait for one of the internet terminals (old patch-work machines with keyboards the letters of which are third and fourth generation magic marker capitals, and sometimes permanent burn-ins) or a long distance phone booth, nothing than to lounge on the creaky chairs lined against the far wall facing the counter, only few of which haven’t yet been pulled up to where two or more people eagerly share one keyboard, one mouse, one screen, sometimes dividing up the labor of typing and clicking, sometimes gaping passively, watching the traffic: that past the windows in the bustling street outside, or that within the shop flickering on the screens, glowing windows to EL RED.

One of those waiting has the mercy of opening a window, mixing the stale air and smells of unwashed bodies with the engine fumes from outside, the clicking and clacking keystrokes and Spanish long distance exclamations exchanged over the line with the immediacy of the outside street-life with its honking and hollering, and it earns him the tersest of smiles from the blonde captain. It is always with her mouth closed that she divines these tokens of appreciation, and I see his eyes glaze over, gaze away just in time to miss it; she, however, is immune to my reply in his stead, my smile unlike hers all teeth. 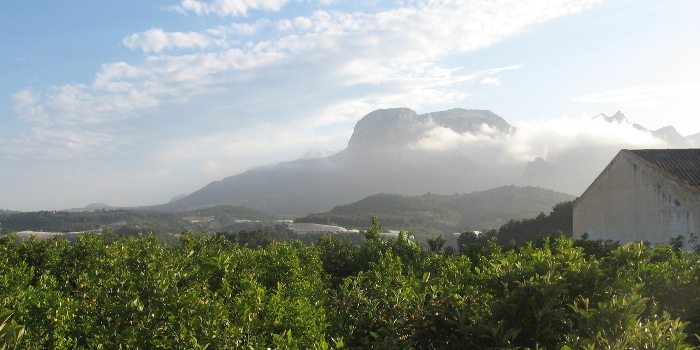 The view from Callosa d’en Sarrià in Spain.

Her pony tail swings around to HOLA a newcomer, sell a recharge phone card for cinco euros, direct new clientele to wait their turn. Within this pack of teenage Spaniards and Mexican workers, we are GUIRI – with our wallets stuffed in the front pockets of our shorts, our shoulder bags resting in tight clutch on our laps, our need to use the out-of-order facilities because we think we are too shy to piss in the street as the locals do, our yearning for coffee no matter how greasy, our hunger to check bank accounts and email inboxes because our lives and homes are elsewhere – we don’t belong here, but our captain serves us with the same indifference we lack and which she affords everyone, no hard feelings, tío, tía. We get our media hora online just like everyone else, should there be need for more it’s back in line and wait your turn again.

There is no smugness by the gifted few working a job during the day over the many who don’t, they mingle here at night when the day’s heat subsides enough to make being indoors bearable, united in their want to check lottery drawings, sell trading cards or play poker online, open facebook pages to look at pictures of newbornes back in their home country, family. Unlike in the Estados Unidos, here the Mexican workers speak the language of their guest country, but just like in the US, they keep to themselves, stick together, prefer the community of their own.

And it is our blonde pony-tailed captain with her smile leading us through, her whole presence saying, we’re in this together, I just happen to be THIS side of the counter; should anyone blow their cover, lest the heat and frustration and lack get the better of them and demand anything from the day’s earnings to a bottle of the high percentage lined up on a wooden board behind her head at knife-point, there’ll be nothing to protect her other than the sure fact she’s been there before, lived through it at least once already.